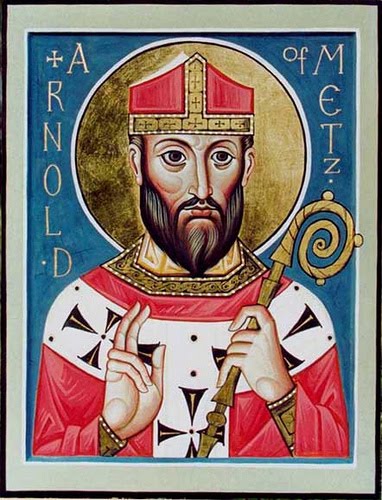 Arnulfo de Soissons, a famous clergyman who became Bishop of Soissons – not without regret, as he fled from the Monastery in order not to have to occupy this position – was fond of two fluids that changed the course of humanity: first, he introduced the production of boiling water in order to prevent the transmission of contagious diseases. About the second, we shall speak later.

Legend tells us that a wolf obliged him to return to the Monastery and assume his responsibilities, the reason for which he ended up as Bishop after being ordained as a priest, something he had also not wished for.

So, here we have a Bishop as much a rebel as he was fundamental for the future beer community: in later years, he founded St. Peter’s Abbey in Oudenburg where beer was soon to be manufactured. The beer abbot encouraged the country people to drink this brew as “a gift of health”.

Disobedient, a beer-lover and almost a biochemist, he was as much a friend of boiling water as he was of the drink that brings us together today.